I’m happy to announce that I’ve started a new relationship. It’s still early days, but I feel good about it. I’m nervous, though, you know? Starting something new is scary. My fear is based on past disappointments. What if this one starts to get annoying or worse, boring? Or what if what happens last time happens again?

It took me a long time to get into my last relationship. There was a lot of talk about it in my circle of friends. Everyone was telling me I should go for it. I resisted for a long time, even though I was interested. I held off for a so long because I was afraid to commit. A relationship takes a lot of time, not to mention the emotional expenditure. I knew that if I got really into it, there would be the yearning. I tend to throw myself into things with all my heart and I was afraid of getting lost.

And sure enough, after only the first time, I was desperately hooked. I wanted more and would stay up late, completely consumed. When we weren’t together, all I could think of was being there again. For the first time in a really long time, I felt completely satisfied.

And then the bottom dropped out and it was over. Right at the moment when things were getting good, it ended. I was devastated. And then I was angry. It’s so unfair to have that happen. It’s like they get you to a point where they know that you’re hooked, then they yank it away.

So it’s taken me a while to start my new thing. I’m cautiously optimistic. So far, I’m enjoying it, but I still think about what I had before because I know that one day, it’ll return. And call me disloyal, but I will go running back as soon as it is. Because Orange is the New Black is good, but I can’t wait for Season 3 of Downton Abbey on Netflix.

Since publishing, this post has become my most read. Facebook friends who don’t usually respond were Liking it all over the place. This tells me 2 things: people weren’t reading to the end/didn’t get the joke; this is a topic many can relate to. Well, the trick topic, that is.

At first, I thought this was just a few isolated incidents, but when a close friend saw me and asked why she had to read on my blog that I’d met a new man, I realized that perhaps my clever little piece wasn’t so clever after all. My buddy Rich said that people want to believe that I am actually writing about a new relationship because they want me to happy. Fair enough, but do you really think I’d write about that here? Like this? Not likely. 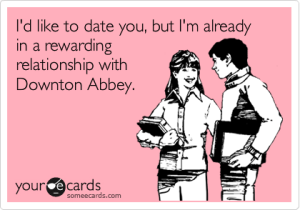 2 thoughts on “New love is scary”