Friday afternoon, I took part in a most irritating conversation. It was with two girls in the office. Both of these ladies are stunningly beautiful. I have to say that I think that there are a disproportionately high number of attractive women in my workgroup, but these two in particular are distinct in their universally-recognized beauty. 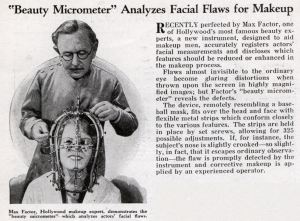 On this occasion, and others I’ve heard as well, these two were obsessing in the most infinitesimally concentrated way about what they consider their physical flaws: how much they hate them, what daily heroic efforts they go through to mask them, how far they would go financially and physically to fix them.

And let me tell you, these were not flaws such as a bald patch on one’s scalp the size of one’s palm, or a particularly protrusive and hirsute mole, or even a grotesquely large nose that wishes to be cut off to spite its face. These are tiny things. Minuscule things. Things that no one, including me, who was standing there looking at these two, would or could notice.

“That’s crazy!” I scolded them.

One of them insisted, “Can’t you see it? Don’t you notice it?”

“No!” I maintained, “I’m not looking at your X—I’m listening to what you’re saying!”

“It’s ridiculous the amount of time you’re spending obsessing on these things,” I told them.

And that’s when they beat their previous ridiculousness with something even bigger:

“You’re only saying that,” one of them said to me, “because you’re perfect!”

What the what? That’s a pure uncut crock, I thought, and begun to point out my bothersome and unsightly blemishes to prove that their statement was untrue when I realized that was fairly pointless, not to mention hypocritical. Because the fact is, I’m no better off than them in terms of this highly-focused self-examination and criticism.

Why do we do this, ladies? And how can we stop? It’s really a disservice unto ourselves. We are the ones holding ourselves back. True, some might say that it is because we live in a patriarchal society where the unrealistic ideals of attractiveness are dictated by the irrational fantastical desires of men who, by no fault of their own, never really advance past adolescence as far as their likes go. But are we not enabling those ideals by continuing to buy the creams, apply the cosmetics, and dye, perm, tweeze, and wax our hair?

I think that part of being a modern, confident, independently-thinking woman, and even a feminist perhaps, involves the acknowledgement that we have to take the responsibility of rising to the beauty challenge that’s put out there in mainstream media. After all, we are not sheep! And if we were, we’d be shearing ourselves on a much more regular basis. Baaaaa.