Five years ago, on a strangely foggy day in January, my friend, Steve, got into his car to do one of his favourite things: drive around listening to music. That day, the combination of bad visibility, black ice, maybe speed, probably a wandering mind, and definitely panic caused him to veer into oncoming highway traffic. His car was completely obliterated by a fruit delivery truck traveling in the other direction. A newspaper photo showed Steve’s car, the top half completely lopped off, random boxes and debris strewn across the road, a smiling cartoon strawberry waving from the side of the delivery truck. 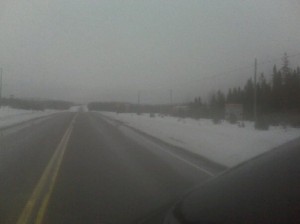 Steve and I hadn’t spoken for a couple of months, but before that, we’d been fairly close. Since highschool, throughout university, and after I’d gotten married and had a kid, we’d pretty much kept one running email thread going. And then one day, it stopped. I tried (not that hard) to reach out to him a few times, had meant to give him a call that Christmas when I was home for the holidays, but it got pushed to the bottom of my list.

The truth is, it had gotten difficult to talk to my friend in person. He’d always been eccentric, highly-intelligent, different, unusual, a definite original. On screen, we would cover any number of topics from current events, music, books, film, politics, philosophy, and ironically, death and dying. But face-to-face, Steve was intense. Argumentative, provocative, demanding in conversations that seemingly didn’t go anywhere. ‘Manic’ is a word I’d use to describe the last time we hung out.

But that was Steve. Being around Steve always gave you a slightly disturbed feeling, like something weird was going to happen. Surreal. This is how I felt as I carried his ashes down the aisle at his funeral, this song by New Order, his favourite band, playing. I was certain that he was going to stand up out of the surprisingly big crowd, too big to fit in one room, the spillover in another seating area, watching the funeral over video link. I thought for sure that he’d stand up, we’d hear his breathless crazy laugh, and then we’d all shake our heads and go, oh Steve, you did it to us again, you nut! Of course, that didn’t happen.

So many things I read these days are advice on how to be more happy; live more efficiently, healthfully, relax more, stress less, follow your passions and dreams. My impulse reaction to those is often something akin to, who are you to give me instructions on how to live my life better? No one knows what you’re feeling and going through. And the way you’re living your life—as long as you’re not hurting anyone—is just fine.

Five years after his death, I think about what all has happened in my life and wonder what he’d be doing today. Social media wasn’t hardly as prevalent back then as it is now. Would he have participated? Would that have helped him? Who knows. At any rate, five years later and I’m still thinking about you, buddy. Wish you were still in the game.