Sometimes I hear stories from other people that are so good that I have to retell them. This one belongs to my baby-daddy, David.

After undergrad, David did what many upper middle class university graduates without a job do and galumphed off to Japan to teach English. There for a couple of years, he made a few friends, including a young twentysomething Japanese kid, living on his own for the first time. 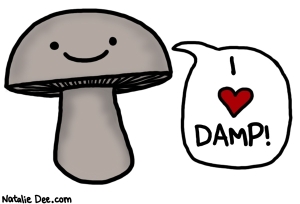 Tokyo in the summertime is hot and humid. David told me that if something gets wet, it pretty much stays wet for the rest of the season. The word “dry” disappears from the dictionary entirely during the summer months. Clothes that had been washed and hung to dry in his shoebox of an apartment would have to be put on damp and clammy, sticking to his moist skin. (Incidentally, I have met more than a few people who are uncomfortable with the word “moist”.)

David’s buddy was housekeeping-ignorant. Having had his mother clean up after him his whole life, he was at a loss on his own. As David tells it, his friend’s idea of doing laundry consisted of bunging his stinking, sweaty clothes in a pile on the floor of his closet.

After doing this for a while, though, he naturally ran out of clean things to wear. So the several weeks’ large pile of clothes got pushed out of the closet into the middle of his 1 bedroom apartment. At the very bottom of the pile, buddy found a pair of underwear. The gitch had been there for a while and squashed under all the other dank items had maintained a moisture level that was apparently a fertile ground for growth.

The “spores” that had been present on the underwear had come to life in the ideal conditions and there in the gusset had sprouted some small fungal buds. Mushrooms. Or, more appropriately, toadstools. Shitakes. Someone stop me.

Along with being a sloppy housekeeper, buddy was also a little bit crazy and goofy and thought, wouldn’t it just be hilarious if he actually ate the mushrooms? Yes, it would! So, he harvested his crotch crop, fried them up with a bit of butter, and gobbled them up.

Very soon after, he started feeling really sick. And then really really sick. Hallucinating crazily, he ended up checking himself into the emergency department at the hospital. The doctors asked him what he’d eaten and he told them about the mushrooms. Apparently in Japan, hallucinogenic drugs are a major no-no, so the doctors followed policy and called in the coppers. After convincing the cops that he hadn’t actually meant to grow not-so-magic mushrooms in his tighty-whities, he was finally allowed to leave the hospital, uncharged.

I think the lesson here is clear: actually, I don’t think there is a lesson. That guy was just really crazy-dumb.